LED flood lights are point sources that illuminate evenly in all directions and can be adjusted in any direction. It is best used as an analogy between a light bulb and a candle. LED flood lights can be placed anywhere in the scene. For example, it can be placed outside the range of the camera or inside the object. Usually, many different colors of floodlights are used at a distance. These floodlights can cast and blend the darkness on the model. 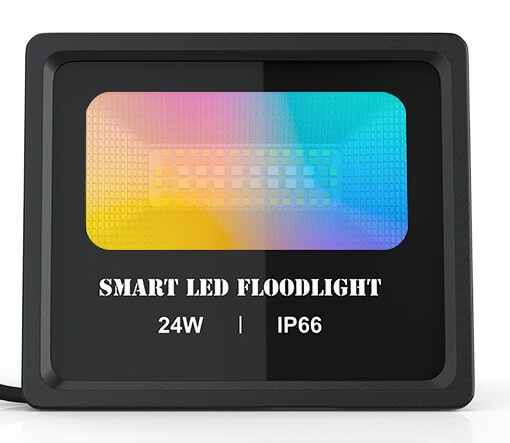 . high purity aluminum reflector, the most accurate beam and the best reflection effect.

.The lamp can be replaced as an open type, easy to maintain.

.The luminaires are equipped with a scale plate for easy adjustment of the lighting angle.

A built-in Bluetooth chip controls smart LED flood lights. In small engineering applications, Is is no need controller. It can use it through smartphone. It can achieve dynamic effects such as fading, jumping, color flashing, random flashing and fading.

LED spotlights are also known as projector lights and spotlights. They are mainly used for architectural decorative lighting and commercial space lighting. They have a heavy decorative component as well as around and square appearance. They also have a more traditional appearance and project light slightly differently due to the need to consider heat dissipation properties.

Illuminators use a rotating symmetrical reflector, an asymmetrical shaft with a rotating proportional light source mounted along the shaft of the rotating reflector. The isometric curve of this type of lighting is concentric.

When a single lamp illuminates this type of spotlight, an elliptical point is formed on the illuminated surface and the illumination is not uniform. However, when multiple lights are lit, these spots overlap each other and can produce good lighting effects. For example, hundreds of rotating symmetrical floodlights are often used in stadiums and mounted on towers around the stadium to achieve high illumination and high illumination uniformity.

The isometric curve of this type of projector has two symmetrical planes. Most luminaires use asymmetrical cylindrical reflector, and the linear light source is mounted along the cylindrical axis.

This type of lamp has no symmetrical planes in its isometric curve. Mixed lamps are mainly used, which have different types of light sources with very other light intensity distributions and unique lamps designed to meet the specific lighting requirements of the place of use.

LED spotlights mainly use high-power LEDs. Some companies have chosen 3W or higher power LEDs due to proper heat dissipation technology. LED spotlights are suitable for floodlighting in large settings, buildings and another lighting.

What else do I need to know about using LED spotlights?

.The bulb can replace with an open type that is easy to maintain.

.The bulb is equipped with a dial for easy adjustment of the lighting angle.

The difference in use.

You do not need to place too many floodlights, otherwise, the visual effect will become dull; in practice, you need to pay attention to the lighting parameters and light perception of the whole application.

Spotlights are more focused in the direction of the beam and have a graduated plate to adjust the lighting angle.

Differences in range of illumination.

LED flood lights have a wide and even lighting range; LED spotlights, also known as spotlights, have a smaller luminous angle and are relatively more concentrated.

. Install the guardrail on the wall and punch a hole. According to the actual requirements, the spacing should be within 3 cm.

. Take anti-static measures, for example, the workbench should be grounded, wear corresponding static clothing, and take anti-static steps because different LED floodlights have other quality and different anti-static capabilities.

. Pay attention to the airtightness during installation, poor airtightness will directly affect the service life of LED floodlights

The wiring of LED floodlights should not exceed 25 cm, which can extend the power of the transformer accordingly, otherwise, it will affect the brightness.

LED floodlights are widely used, so installation techniques and precautions are very important. Under the correct installation method, LED is a new light source that can ensure the LED floodlight stable, long-term regular operation.

The guide of LED Flood lights

what is the best smart led flood light